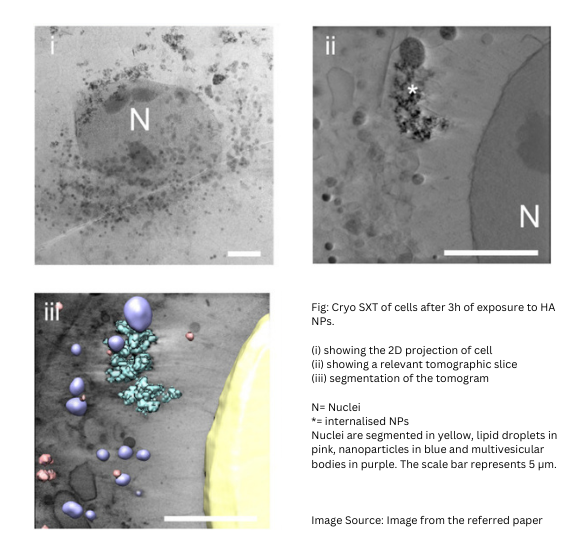 Hydroxyapatite (HA) in the form of nanoparticles (NPs) is widely used as a vehicle for the transport of genetic material into cells and in bone regeneration. Since HA is a naturally occurring form of the mineral that makes up the bones of all vertebrate animals, it is biocompatible in this environment.

More recently, HA NPs have also been proposed as a useful tool in cancer therapy as it has been observed that they were able to cause cell death of several cancer cell types whilst having minimal side effects on healthy cells. It has also been observed that ion-doped HA NPs show improved cytotoxic potential towards cancer cells and are more selective than non-doped HA.

The most accepted hypothesis to explain this cytotoxicity is that the ion-doped HA NPs are preferentially internalised by the cell, resulting in the release of a high concentration of calcium ions that lead to cell death.

In the attached paper, cryo-soft X-ray tomography has been used as a novel approach to help validate this hypothesis, by using it to analyse the ultrastructure of cells to detect internalised HA NPs, as well as to calculate the density of individual organelle (using soft x-rays linear absorption coefficient) in order to estimate the uptake of the calcium ions.

Cryo SXT was used alongside fluorescence microscopy to investigate intracellular calcium in its soluble form, which is one of the limitations of high-resolution TEM.

The researchers conclude that the internalisation of HA NPS was the main toxicity mechanism that resulted in cancer cell death.

This has been made possible by soft x-ray tomography’s ability to detect the position, volume and density of particles in any part of the ultrastructure of a whole cell.